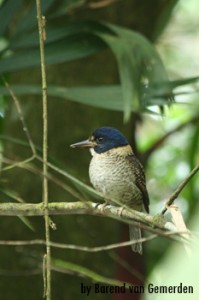 Birdwatchers know that it needs a hard-wearing patience to find the Scaly-breasted Kingfishers (Actenoides princeps). Few people have seen the bird in their natural habitat reportedly from Lore Lindu National Park in Central Sulawesi. Recently, more and more hiking operators offer to see the bird in North Sulawesi. Tangkoko Nature Reserve is the most recommended one followed by Ambang Nature Reserve and Bogani Nani Wartabone National Park. Rarity of sighting grows passion about the bird.

Mahawu Mountain is found to home a reasonably good population of scaly-breasted kingfishers. Mahawu is an active volcano located in Tomohon, North Sulawesi. It has an easy walking track to reach the summit which offer a stunning view of bubbling caldera and a spectacular outlook to Tomohon City, Manado City, Manado Tua-Bunaken-Siladen island chain, Klabat Mountain, Tonsea landscape, and the remarkable Lokon volcano.

In May 2008, John Tasirin, Nick Brickle and Iwan Hunowu made a journey to Mahawu with a main goal to find the bird. The trip started from a hotel in Manado at 5:30am. In about half an hour the team had reached the entrance of the Mahawu trail, near Rurukan. It is about 700 m above sea level. The trail begins at a sloping plane with horticultural farmlands in both sides of the track. The slope gets variably steeper as the journey proceed. It was about 6:15am.

The day was getting busier for birds in Mahawu. Mountain tailorbirds (Orthotomus cuculatus), Crimson-crowned Flowerpeckers (Dicaeum nehrkorni), Yellow-sided Flowerpeckers (Dicaeum aureolimbatum), Grey-sided Flowerpeckers (Dicaeum celebicum), Black-fronted White-eyes (Zosterops atrifrons), and Sooty-headed Bulbuls (Pycnonotus aurigaster) are on sight. Pre-recorded calls of the Scaly-breasted Kingfisher were played in a periodic interval using a disk player with active speakers. A number of vegetated gullies on the hillside of the walking path were examined. Half an hour later, a Scaly-breasted Kingfisher crossed the path and roosted on a branch of a native fig tree. The branch was about 2.5 meter from the ground. It was relatively very a close sight. The bird hanged around for about 15 minutes before it flew away to the jungle. 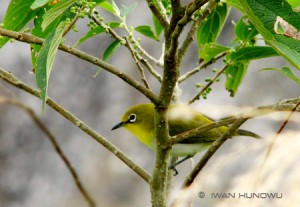 Mahawu Mountain offers an easy encounter of Scaly-breasted Kingfishers in a pleasant path to its scenic summit.