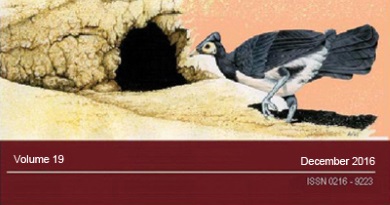 The editors of KUKILA proudly announce the publication of Vol 19, which is packed with interesting articles on Indonesian birds. Logged forest is now the dominant habitat available for forest-dependent birds in Indonesia, yet its importance for biodiversity conservation is largely unappreciated or ignored, leading to widespread destruction by fires and conversion to oil palm plantations. Our first article focuses on the birds of logged lowland forest in Harapan Rainforest Ecosystem Restoration Concession in Sumatra, where Marthy and co-workers conducted transect surveys to determine bird densities. Using detection probabilities of each species, they show that this degraded forest is valuable for many birds, including some threatened species, but comparisons with forests from other parts of Indonesia were limited due to the dearth of surveys that incorporate robust sampling techniques to estimate densities.

Next, Bashari and co-workers report on the status of the Critically Endangered Caerulean Paradise-flycatcher, endemic to Sangihe Island off the north coast of Sulawesi. Their survey results suggest no increase in the population size since 2005 or even earlier, partly due to ongoing forest clearance for plantations as a consequence of the gradual attrition of regulations governing land management. Large numbers of Pied Imperial Pigeon are reported from Belitung Island, off Sumatra, and the nest and juvenile plumage of the Ashy Robin, endemic to West Papua, are described for the first time. In addition there are short communications reporting on a number of ‘firsts’ including the first Indonesian record of the as yet undescribed ‘spectacled flowerpecker’. Finally, our regular ‘Recent Literature’ section lists over 200 recent publications from the region. Happy reading, dan selamat membaca!