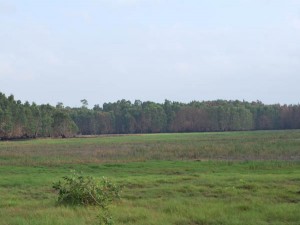 Previous edition : Observing birds in Wasur National Park, Papua left many funny stories. Start from sneaking style of the observer until sting  by the bee colonies on the tower during observation! One of the birds observed is Black-tailed Godwit (Limosa limosa).

c. Benefit and Role of the birdwatcher

According to some birdwatcher, birds have big benefit and and role to the ecosystem and human, such as : As the first indicator of methane and carbon dioxide pollution, for example is Canary (Serinus canaria); Eradicate the Wereng pest, done by swiftlet which according to the research can eat up too 1000 Wereng each day; As recreation tools specially birds with beautiful voice such as Pied Bushchat (Saxicola caprata)which has a high value; As the material for medicine, but the information about it still keep  as a secret.

But some also become pest, like Red-breasted Parakeet (Psittacula alexandri). This species attack the rice and corn (Puroso, 1992).

An observer who loves  bird like mad will be anxious and sometimes become stress if in certain amount of time does not doing his/her hobby. But, they can feel satisfiedi if they can observe the birds. In Europe, particularly in England, there are some birdwatcher community web that can exchange information to each other until now. Continously, they observe bird that rarely found on the field. If a person/group/observer were able to find certain species of bird on the field, they will pass the information gathered  quickly to their coleages or to other organization. 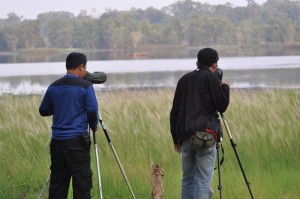 is in England. Most of them are coming from Europe and the other are coming from US, Netherland and Japan. In Indonesia, birdwatching activity on the field is not as popular as bird contest or raising bird inside the cage. People know more about turtledove sound contest and pigeon race rather than birwatching competition. But since the 1900’s pioneered by one government organization, birdwatching activity on the field start to be introduced. Until the year 2009, the number of birdwatcher in Indonesia is increasing. This can be seen by the forming of some birdwatcher club organizations in some location in Indonesia.

Every year these birdwatcher clubs gather together for an event  to watch bird or having a bird race on the field. Particularly for bird that lives in wetland habitat like in Wasur National Park, some organizations and clubs are doing bird cencus simultaneously in some countries. This activity is called Asian Water bird Census (AWC) and it is a voluntary activity. This activity is coordinated by Wetlands International and can become a tools to introduce birdwatching in the field to the people. 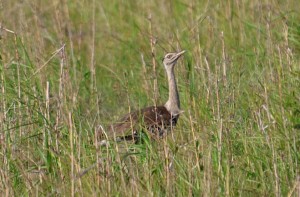 There are many bird observing spots on the natural habitats in Wasur National Park, Merauke resident, such as beach, mangrove and lowland forest. In some place, especially on the edge of the forest, we can observe some endemic species of birds like the bird of paradise (Paradisaea sp.) and Goliath Cockatoo (Probosciger aterrimus).