Have you ever heard of Kadatua?  It seems like name of a unique, cute and smart bird in Indonesia (Kakatua or Cockatoo). But, what is the connection between Kadatua and Kakatua? 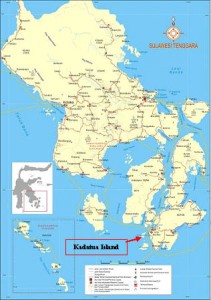 Kadatua is small Island in South-east Sulawesi with ten villages. It is about 15 minutes by motor boat from Topa Harbour of western Buton Island. Even though it is close to Buton city, the local community is still isolated and there live in poor conditions. The structure of Kadatua Island is composed of coral (atoll) with dominance of rock; therefore it is difficult to find fresh water. For example, Lipu Village has only one fresh water source having a depth of 63 meter. That is the reason why the local community uses rain for cooking and other activities not too dependent on cultivation (only planting cassava and cashew nut). Almost all of the populace are fishermen.

Konservasi Kakatua Indonesia and Indonesian Parrot Project have begun to study Lesser Sulphur-crested cockatoos (Cacatua sulphurea sulphurea) in this Island with funding support from Loro Parque Fundacion. These observations of cockatoo in Kadatua are probably the first ones reported and no one researcher has reported any publications concerning the cockatoo’s existence on this island. It is therefore interesting that we could find this endangered bird Kakatua (bahasa Indonesia or cockatoo in bahasa Inggris) in Kadatua. However, no one can explain the origin of Kadatua’s name; did it derive from “Kakatua” or not? But, certainly this unique bird still can be found flying free in wild as their natural habitat.

Kakatua was a common wild bird in Kadatua before 1990’s, especially at Lipu Village (the older village in Kadatua, located on the top middle of island having a small forest). But, since the increase of trapping and smuggling in Kadatua, this bird is now difficult to find in the wild in part due to loss of the small forest in the middle of Island, which was  converted to cashew nut cult

ivation combined with the absence of an adequate fresh water source. Nowadays, one needs more care and patience to spot the cockatoo. From direct observation, we spotted only found two cockatoos who had different locations of their sleeping tree – one in Lerere (Sterculia spp.) and one in Beringin (Ficus sp.).

Trapping is the main factor causing the population decrease in Kadatua. The trappers make simple snares from bamboo and string. The Kakatua are trapped by snares in an active nest tree like Terminalia sp or other trees usually while perching.

They are not only sold to be pet animals into pet animals, but they also are sold to Wangi-wangi Island or to Makassar. We obtained information from one trapper, who said that he trapped one cockatoo about three months ago (July 2009) on his plantation.

Intensive observation and protection are needed of this species before this localized population of cockatoos becomes extinct on this island. The cooperation of the local community is critical in order to support conservation of this rare cockatoo. Spreading information to local people of the risk to these birds – their birds – and of the current low degree of protection is needed, in order to stop trapping and smuggling of this endangered cockatoo.