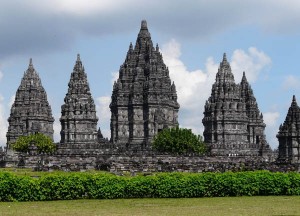 Daerah Istimewa Yogyakarta is a well-known city in Java Island, Indonesia. Yogya (as it is usually called) has a unique charm, which is felt on every visit. Every one who goes there returns with wonderful memories, making Yogya a good site for tourism. Prambanan Temple  is the product of phenomenal artistic labour in Yogya, built on Kingdom of Mataram Kuno in the nineth – tenth century. It was in Sanjaya Dynasty (when Rakai Pikatan and Rakai Balitung are governing the Kingdom).

Prambanan Temple has 1,000 statues, three main temples in front center (primary yard) with bigger then others, namely Vishnu, Brahma, and Shiva Temples. Those three temples are symbols of ‘Trimurti’ (Tri = tiga = three; Murti = dewa = God in Hindu belief; (English: ‘three forms’; Sanskrit: trimurti) is a concept in Hinduism in which the cosmic functions of creation (dewa Brahma), maintenance (dewa Vishnu), and destruction (dewa Shiva). These three deities have been called “the Hindu triad”  or the “Great Trinity,”. All of the temples face the east. Besides, there are 2 flank temples, 4 kelir temples, 4 corner temples and other smaller temples are around of the three main temples. See Map below.

According to the legend, Prambanan temple was built due to a love affair legend. When Prince Bandung Bondowoso asked for Roro Jonggrang to marriage him, she doesn’t want, because he killed King Ratu Boko (Jonggrang fathers), so Jonggrang asked to Bondowoso an impossible task: build temple with 1,000 statues in one night. If he fulfilled the task, he could marry her. The request was nearly fulfilled when Jonggrang asked the villagers to pound rice and to set a fire in order to look like morning had broken. Feeling cheated, Bondowoso, having only completed 999 statues, and cursed Jonggrang to be the thousandth statue. Through the intervention of Shiva, the petrified body became the idol or mascot that now stands in the north of the “Shiva Temple” at Candi Prambanan.

That legend becomes Prambanan Temple locally known with name of Roro Jongrang Temple. This Temple is the biggest and a most beautiful Hindu Temple in Indonesia, having uniquely detailed reliefs not seen in other temples. There are detailed reliefs of several animals in the walls of the temple, but their meaning is unclear. Almost all of the temples have bird reliefs which resemble cockatoos.

Another unique relief is that of the Kalpataru tree (see above). In the Hindu religion, the tree is considered to be the tree of life, eternity and environment harmony. In Prambanan, the relief of Kalpataru tree is described as flanking a lion. The presence of this tree makes experts consider that Javanese society in the Ninth Century had wisdom to manage its environment. It is interesting that a cockatoo also described in the top and bottom of the relief of Kalpataru. Scientific Archelogicy V (1989) explained: “Relief Kalpataru is holy tree of Hindu and Budha, which is this kalpataru relief have important elements, like: to be an umbrella, pinch animal, birds in the top of tree, pocket of riches, beads decoration and pearls. Umbrella means the holy of kalpataru tree, pinch animal is safety of that tree, birds means the living thing on the tree, pocket of riches and pearls means prosperous tree”. That means all of living thing having their own function and advantage in the world and not to be useless.

The interesthing one, expecially on Brahma and Vishnu Temples, we can found a different type of cockatoo relief model. The picture use cockatoo as ‘supporting frame’ or stand border surroundings both temples (See above.). Krom (1923a I: 456) explained: “… surroundings border, in Brahma and Vishnu temple case is cockatoos type”. (Memuji Prambanan, Editor Roy Jordan, page 151). Again, reliefs depicting cockatoos occur more frequently than other bird in relief at Prambanan.

Cockatoo relief is found in all of temples in Prambanan, except in ‘Shiva Temple’ (who have Roro Jonggrang statue). Means cockatoo relief is also symbols of Bondowoso feeling love with Jonggrang, but she never respone Bandung’s feeling. No cockatoo reliefs have been described in this temple (unlike other temples which are rich in cockatoos or other birds and animals).

Hindu has known about Parrot too (but, Indonesian people known as Nuri). ‘Dewa Kama’ or ‘Dewa Asmara’ (Love or Passion Gods of Hinduism), they are descibed on ‘burung Nuri’ or Parrot bird. ‘Nuri’ means bird from ‘Dewa Asmara’ and usually described as a messenger bringing love latters. The Nuri design is also found on the last ring of ‘Makara’ (traditional Hindu bronze). Connected with authority of Mataram Kuno Kingdom area (Java and Bali), and Hindu belief also Jonggrang story: Nuri as they known of Dewa Asmara and can found in wild as cockatoo at Masalembu and Nusa Penida as autorithy area of the King (when Prambanan has been built). It’s explained on Mantyasih (907 M) inscription: “Rakai Balitung succed to govern all Java land even until Bali”. That is the simple of people thingking point of long time ago before the biologycal nomencalture are known. So, Prambanan Hindu’s Temple with the lengend of love affair is symbolic with cockatoo as Dewa Asmara.  As we known, the cockatoo have white color and this is as also symbol of Holistic.

Bird have symbolized and inspired people to beauty for centuries. The bird reliefs in Prambanan are interesting both artistically and biologically. Hindu beliefs also urge us to respect all living things in the earth, and make us more appreciative of them.

Author :  : Dudi Nandika and Dwi Agustina, they are working in The Indonesian Parrot project, focus on conservation and protection of parrots and now focus on two species of C.s.abbotti & C.s.sulphurea.