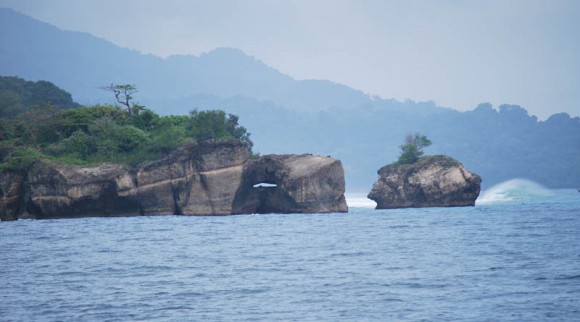 After dusk at about 6:30 pm, our seabirds survey journey began. That day (August 4), Nick Brickle, Iwan Londo, Noni, Agus, Munir and I left Bogor for the Sunda Strait to continue the Indonesian Seabirds Survey (ISSUE). The surveying had begun in August 2009 with the goal of monitoring migrating seabirds in Indonesia, especially the Sunda Strait.

Before going to the survey location, we stopped to visit Taman Wisata Carita. Unfortunately, in the middle of our trip the car’s rear right tire hit a one meter hole. We tried many times to get it out. “It felt like Camel Trophy,” said Iwan Londo after successfully hoisting the tire out of the hole.

After reaching the parking lot of Taman Wisata Carita, we tried to find a Javan Frogmouth (Batrachostomus javensis), luring it with a recording of their call. Although Nick Brickle, Noni and Iwan Londo could hear a call coming from nearby, sadly, we were unsuccessful. After that we continued on to Tanjung Lesung. We got there at 3:00 a.m. 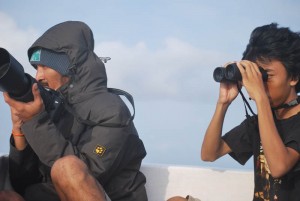 At 6:00 a.m. we quickly got our stuff onto the boat, named the “JAGAT 2”. The JAGAT 2 would be taking us on our seabirds survey. Not long after leaving the dock, a Great Crested Tern (Sterna bergii) flew past us. Rain fell in the middle of our journey, and a male Christmas Frigatebird (Fregata andrewsi) flew past the boat. With his optics, Nick Brickle saw a flock of birds flying low near the surface of the sea. He quickly asked the captain to sail towards the birds. After getting closer, we saw that it was a group of Frigatebirds, both Christmas Frigatebirds (Fregata andrewsi) and Lesser Frigatebirds (Fregata ariel), along with Great Crested Terns (Sterna bergii). They were apparently in the middle of capturing fish! Not wanting to waste the opportunity, Iwan Londo immediately got his camera to immortalize the scene of the birds.

After we neared Pulau Peucang, the rain stopped. In Tanjung Layar we saw several White Morph Pacific Reef Egrets (Egretta sacra) perched on a tree, and a flock of Bridled Terns (Sterna anaethetus) catching fish together with several Brown Boobies (Sula leucogaster), Common Terns (Sterna hirundo) and a type of Shearwater. From Tanjung Layar we continued on to Pulau Panaitan. Arriving there, we saw a White-bellied Sea Eagle (Haliaeetus leucogaster) capturing fish for its afternoon meal. After the captain found a place to stop and rest, we spent our free time individually. Nick Brickle and Noni swam, while Iwan Londo, Raden Agus, Munir and I decided to fish with the boat’s crew. That night we were entertained by an awesome attraction: dolphins chasing flying fish. Wow, that day nature really spoiled us! 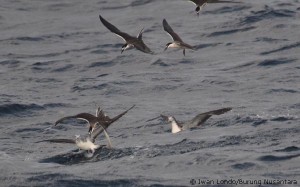